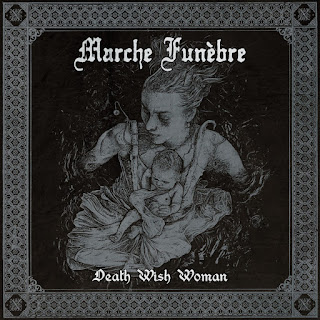 The Belgian band Marche Funèbre has been around since 2008, releasing a total of three full length and a previous EP. During the beginning of 2017, they released their third album titled "Into the Arms of Darkness" which in my opinion, is the best Doom Death metal album of that year, including epic tracks like "Deprived (into Darkness)", "Lullaby of Insanity" and "The Garden of All Things Wild," this production denotes the great level and skills at songwriting, that the band has achieved along the years and personally I was expecting to heard something new from them soon and here we are! 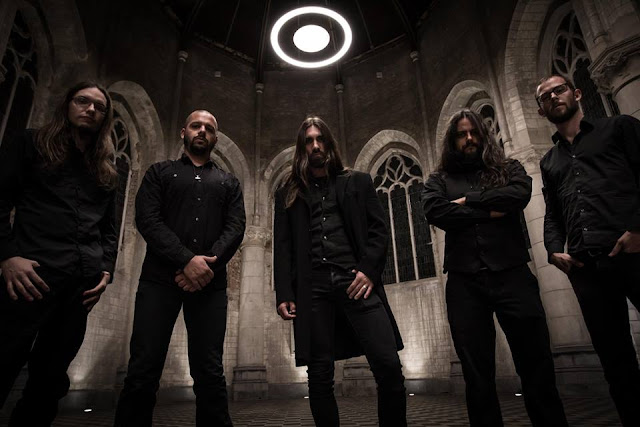 "Death Wish Woman" has four tracks clocking near the half hour of the most intense Doom Death metal, I'm sure it will get you with its melancholic melodies and insane energy. "Broken Wings" subtly opens the gates to the madness that carries with itself, Denis Lefevre delivers an exceptional drumming supported by the crushing guitars of Peter Egberghs and Kurt Blommé, deeper bass lines come by Boris Iolis, as well as the clean vocals and the growl vocals are brilliantly delivered by Arne Vendenhoeck. The second track is "Death Wish Woman" which kicks in with a versatile and intense drum work, the killer mid-pace riff takes the lead and sounds oppressive and punishing with flagrant and intimidating vocals that makes the track superb, then comes the epic track, "A Departing Guest" in the same pace as their previous songs, it shows clearly what this band is capable to do. Down tones the guitar riff to transmit a grievous feeling, the drumming are meticulously played while the atmosphere fogged painfully towards the end to bring back more colder and bitter vocals. In the last track Marche Funèbre, they go in with a cover from the band Paradise Lost, the chosen track is "As I Die," this is one of my favorite songs of all time. In the past, I have heard other bands covering this track Eternal Tears of Sorrow, which I like. Netherbird has a particular approach that makes it sounds unique, but Marche Funèbre gets a closer sound comparing to the original and for some reason it's catchy and I like it.

I want to conclude that "Death Wish Woman" is an excellent EP that offers only a small test of their creativity, no doubt this band will bring great surprises in the near future. Followers of the Doom Death sub-genre won't feel disappointed, this is a highly recommended band, avoid them if you like going for ultra-fast and making brutal noise, but if you here looking for a musical enrichment, this is a good start.