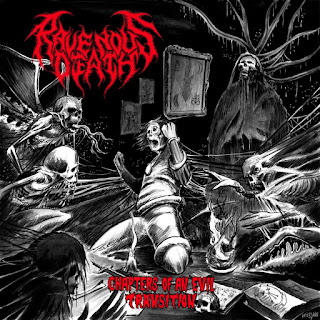 Ten tracks of the most inhospitable, raw and perverse thoughts.

Mexican Death metal outfit Ravenous Death released their debut album entitled "Chapter of an Evil Transition" through the Spanish record label Memento Mori. The band plays a Death metal that is very influenced by the Swedish old school death metal bands like Entombed, Vomitory, Dismember and the Dutch Asphyx only to mention a few bands; However, I would compare their sound to the arising new generation of Swedish Death metal like Feral the reformed Entrails, Revolting.

The band was formed in 2016 and they rapidly started to work in songwriting for what became their EP "Ominous Deathcult," released independently in 2017, this record included five tracks being the self-titled track, what I would call a merciless, rotten and evil song in this record, Ravenous Death line-up consist of drummer Esteban Salcedo, guitarist Enrique Fray, vocalist Victor Mercado, and bassist Alejandro Méndez, you might not familiar with these names, but I can assure you, despite the short existence of the band, they are seasoned musicians and well recognized within the Mexican scene some were or still playing with bands such as Death's Forsaken, Remains, Demonic Manifestation, so don't be fooled.

"Chapter of an Evil Transition," the record contains ten tracks of the most inhospitable, raw and perverse thoughts. The album unfolds with a tenebrous and sinister concept, conceived only by a brilliant twisted mind, therefore, the music should be dark with a particular stench of death the initial track "Prelude to Evilness" delves you with a threatening melody and inaudible recited voices in the background. This set a haunting feeling, "Doomed to Exist" delivers an obliterating and ceaseless blast beat, the guitar riff is a perilous frontal assault full of hatred with the growls are nonstop and crushing. "Harvesting Hate" the vocalist Mercado basically spits out his lungs with such of infernal scream at the beginning, while the guitar sounds putrid and nauseating with a killer riffs, it's followed right away by "Evil Dementia (The Voices of the Nobodies" appeals to the same formula as the previous tracks, not for lack of inspiration, rather reinforce the morbid monstrosity that they have become, "Awakening of the Damned" grabs a brutal riff and builds from scratch an abominable entity that is brilliantly linked to the blistering drumming of Salcedo and the beastly growls at his best moment. For me, the best track of the album, "Cursed Origin" grants you another great opportunity to appreciate the varied songwriting achieved moving versatility from the fast and loud parts to the mid-pace and melodic grooves. "Initiation Ritual" takes a Grinding approach with a chaotic and furious pace where harmonies fade away and let the drums feast in total anarchism. "The Sinister Being" momentarily shifts things around once again with such great doomy passage at the beginning, but all the sudden they re-route into a brutal and heavier stage, this part reminds me a lot of the Dutch Asphyx with their Death doom style. "Massacre Cult" builds with a thrash-driven riff and punishing guitar solo that is very catchy and the snarling vocals fit perfectly while the rhythmic section provided by the bassist sounds demonic the drumming is simply fantastic the last track is "Soul Consumned by the Occult" have an ultra-fast riffing showcasing the whole malignancy within their souls, the drumming alike is an unstoppable machine gun without remorse that takes you directly to an unexpected and melodious end.

I believe that Ravenous Death despite dabbling into an oversaturated path, the outcome of their production can't be judged simply as another band. There are sustainable elements and creativity to welcome this band to more worldwide exposure, if you got the time, listen to them in "Chapters of an Evil Transition" that will definitely raise more than one eyebrow of amazement.