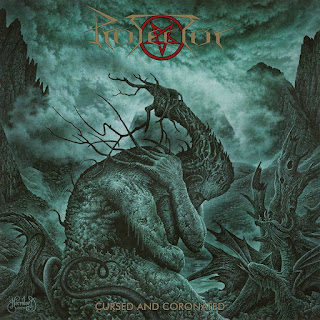 Legendary German band Protector came back with their sixth full length record entitled "Cursed and Coronated", this is their second album after reunited in 2011 and right away they started the songwriting process and by 2013 they released their fifth album titled "Reanimated Homunculus" which honestly knock down everyone around the world, because instead losing the energy and aggressivity they showed since the end of eighties were they put out two great albums "Golem" in 1998 and "Urm the Mad" a year later with their unrelenting thrash death metal, during the nineties was not easy however they were able to released another two albums "A Shedding of Skin" in 1991 and their last studio album by that time "The Heritage" during 1993 but; They were struggling for long time until finally they collapse in 2003, however the flame was not entirely off and Protector came alive more brutal and ruthless than ever.

If we had an extra place for “The Big Teutonic 4”, I would consider (5). And I will definitely put Protector as the fifth band, certainly! You might complaint about it because they haven't been consistent compared to Kreator, Sodom, Destruction or Tankard but Protector have what it takes to be there and their latest two albums can prove my words by itself, because they still offering the same energy and unrelenting thrash death metal of yore and that my friends... is what move the masses around the world.

Protector current lineup is lead by founder member vocalist Martin Missy, drummer Carl-Gustav Karlsson among others (Grief of Emerald and Mastema), guitarist Michael Karlsson also in (Mastema) and bassist, backing vocals Mathias Johansson he plays in (Suicidal Winds and Axis Powers), this formation have been steady since 2005 when they used to be called "Martin Missy and the Protectors".

The CD album "Cursed and Coronated" contains one intro and ten tracks plus three bonus tracks totaling almost fifty-one minutes, the album was recorded at Sunlight Studio in May 2015 by Tomas Skogsberg, mixed and mastered at Temple Of Disharmony by Patrick W. Engel, the cover artwork was designed by Kristian Wåhlin. Out of the ten track included, seven are novel, while the remaining three were previously released, the first of this tracks was "Terra Matter" included in their demo 2011 "The Return of Thrash and Madness", in 2012 the track "The Dirmholt" (which seems to me misspelled) it was released in a split 7 inches vinyl limited edition with the band Erazor and last of this tracks released in 2013 "Xenophobia" in another split 12 inches vinyl with the band Ungod.

The intro infuses some eerie ambiance, with cult drums and ceremonial whispering like invoking a deity, it links rapidly with "Xenophobia" is fast and heavy riffs own the track as the raspy and hellish voice of Missy appears, the drums sounds devastating, "Crosses in Carelia" is another track that sounds heavy and darker with unexpected pace changing, followed by the self-titled track, "Cursed and Coronated" with a simple structure falls into a medium pace but the riffing is sickening, whilst the rhythm section built sounds gloomy but enjoyable, "Six Hours in the Cross" it really contrasts with the previous track, frantic riffage and dispiteous blast beats, with cutthroat vocals, make of this cut a beast, I can clearly define this triplet as the essential core of the album, "The Dimholt" here the band continuous to deliver, the classic German thrash carved by bands like Kreator and Sodom, with exceptional riffs to culminate with a glorious guitar solo, "Terra Matter"  brings a malevolent pace and riffs to obliterate any pseudo-thrash metal from nowadays, "The Old Boil" sounds repulsive and is the last cut in the album, it doesn't feel like a good end, for a moment the bass lines catch me, however the rest goes unnoticed, the bonus tracks are "Intro-Misantrophy", "Sliced, Hacked and Grinded" and "Protector Of Death" all were recorded live at Dresden in 2013, capturing somehow the evil energy that only they are able to displace on stage.

After thirty years and a renewed Protector, still having the fury within them, pulling explosives riffs, strikingly drum pattern and crushing vocals, the production, mixing and mastering are undeniably amazing giving the proper space for each instrument, therefore the result will satisfy the most ardent followers of this Teutonic force and those beginners in the genre, please do not miss this opportunity. 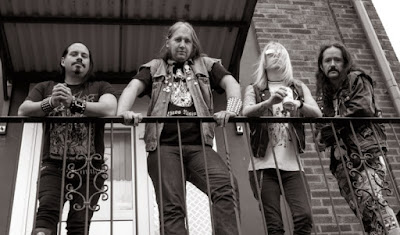