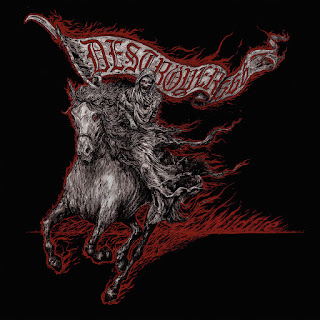 Deströyer 666 is one of the few bands who has reached a cult status, hailing originally from Melbourne, Australia and currently located in London, United Kingdom, the black thrash metal act, is giving signs of life after a period of seven years absence in the studio, when they released their previous album "Defiance" which won an endless rigorous criticism, according to the press by making a slight change compared to their first three albums, but let's move on with what really matters today’s, I'm here to talk about "Wildfire" the fifth album of Deströyer 666, this record essentially has the rawness of vocals, infectious tunes and ripping riffage and conjoined gives you that atmosphere of evil and devastation that ensures to be memorable.

For some reason I have been always thinking of Deströyer 666 as the band who reminds me the old Venom, with their catchy fast riffage, powerful drums and excruciating vocals, that snatch a devilish smile from me and how not? If "Wildfire" highlights many of the elements and qualities that shone on albums like "Raising Phoenix" released in 2000, solidifying their extreme sound or the majestic "Cold Steel ... for an Iron Age" published in 2002 perfecting their intense and malevolent formula of blackened thrash metal.

"Wildfire" somehow has the ability to recreate the adrenaline that flowed at the beginning of the noughties, the opening track "Traitors" with an Araya's-sequel scream and infectious riffage let the hellish assault leaded by K.K. Warlust began, the drums comes in a burst like a storm the track is very fast and merciless, "Live and Burn" still in the same vein every time exposing that rawness they carried with themself, vocals are heavier and chorus works great showcasing a frantic vigor and guitar solos that are able to prickled your skin, then is followed by the instrumental "Artiglio Del Diavolo" which focus on a standard guitar work passing unnoticed in some way, "Deathblow" is another exciting track in this album, seems like every single fast riffing track owns the hooks to get your attention, "Hymns to Dionysus" is fully structure in a melody that stuck in your head, while the ceaseless blast beat drumming excels in this track, "Wildfire" apart to be the first official single that came out, delves in poisonous riff a solid rhythm section and if you have never heard this band before, well this could be a good start, the track is somehow accessible, but still thunderous, the closing tracks are "Die You Fucking Pig!" lyrically a clear statement anti religion, bizarre riffing from the beginning to the end, "Taman Shud" take a different approach with a medium pace the guitar work here is outstanding from simple chords to a superb solo that linger within you, while the track is splitted in two sections due to the use of an interlude that slowdown a bit with undistorted guitar work and a fine drum patterns to reach the highest point of the track and go down again in a subtle manner with stunning choruses work.

I feel incomplete, I don't mean I didn't like how they ended up, but after such overflow of energy, by the end I still have running a lot of blood through my veins, this album have no fillers at all, while some track doesn't make the same effect of the others neither unbalance the rest, I think this album makes an enjoyable  reconciliation with old fans and presents a material with a refreshing sound, "Wildfire" was recorded, mixed and masterized at The Underworld Studios, by Laurent Teubl allowing a clear production where you can hear each instrument, don't let pass the opportunity to listen this album a blackened thrash metal a clear contender for the end year list. 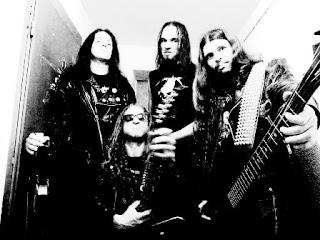