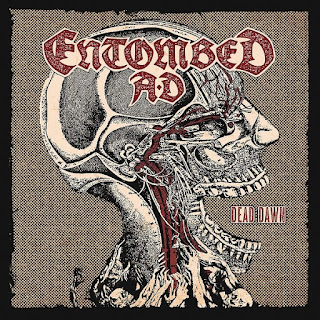 
Entombed A.D. is a name preceded by itself, it might sound weird; But if we take a look to their trajectory then you will understand, Entombed were pioneers of the Sweden death metal back at the end of the eighties, they released nine full lengths, six EP's and countless split in a span of twenty-four years, until a name dispute arose in 2013, causing that their album "Back to the Front" was delayed until the end of summer of 2014 and released under the moniker Entombed A.D., Century Media Records made this possible, now year and a half later they return with a new album entitled "Dead Dawn" including ten killer tracks.

"Dead Dawn" comes to be a very good album, with solid songwriting, collecting all the elements to create something disturbing and wonderful album that can be clearly placed between the heavy and ruthless "Left Hand Path" and the groundbreaking as well controversial "Wolverine Blues" with its rawness, settle down the roots for what will be known as Death 'n' roll; So, what you can expect is a frantic old school death metal album well mixed with classic death 'n' roll grooves and raging vocals.


From the beginning "Dead Down" will put you back to the early days where Scandinavian Death metal ruled the world, the first track "Midas in Reverse" offer a rich approach to those days with such bizarre guitar riffing corroding through your speakers by Nico Elgstrand, triggering with immeasurable speed and intensity, blasting drums command the ferocious pace. the exceptional vocals by Petrov sounds aggressive and frightening it is what make this track a gem, it's followed by the self-title track "Dead Dawn" with pummeling drums by Olle Dahlstedt to build up tension and a blatant riffage evolves from its barbaric fast pace to a heavy mid pace toward the end, Entombed A.D. doesn't reinvent or revolution anything here, instead they go efficiently for their massively sound of yore, "Total Death" would represent very appropriately what I mean, with sickening guitars, ceaseless drumming without intricate patterns and poisonous vocals brings a fast and cogent guitar solo, "The Winner Has Lost" remain infective as the previous track and deepen with thrash riffs, bassist Victor Brandt delivers an stunning and precise lines to frame a compact rhythm section with pounding drums, while vocals are ranging between growls and half shouts along the track, "Black Survival" is a mid pace song its heavy, dense and merciless, this is exactly what an experienced band is capable to achieve within few minutes a total commotion to your senses, the last track is "Not What It Seems" after a brief exposure of synths and acoustic guitar work, the riffing turn out filthy and dark, as Petrov's roar arrive ominous to devastate compassionless and finishing their work here.

At the end what you get is a pure and straight dose of death metal and although I mentioned before, you may not find anything new or influential, but honestly I could not demand more, I get more than enough with this type of recording, the downside of an album like this one, falls in that it hardly can receive an overrated classification, but still a great album to enjoy. 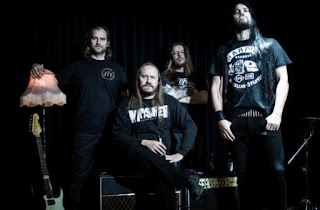