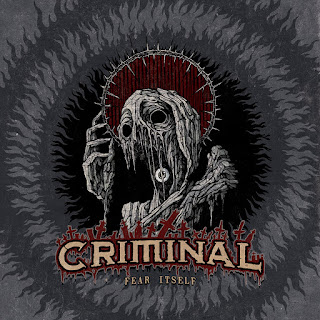 Powerful, compact and crude due largely to the production, still inconsequential but certainly not a bad album

Criminal originally from Santiago, Chile in South America and currently located in Ipswich, UK; are coming back after five years with their eighth and latest album titled "Fear Itself" delivering their unique and unmatched blend of thrash death metal and groove, Criminal history dates back to the early nineties, their discography consists of two demos, seven albums, an EP and a live album, their sound is similar to bands like Sepultura, Slayer, Carcass, Exodus, Sick of it All and Cavalera Conspiracy, so you can imagine what it is this about.

The album "Fear Itself" carries twelve tracks strictly attached to their roots in thrash metal infected with some groove riffs and hardcore essence, while the death part comes in form of vehement vocals, it is true that this new material, doesn't add absolutely anything new to what we already know, although the sound of the band is powerful, compact and crude due largely to the production, still inconsequential but certainly not a bad album.

The album opens with a dormant chord intro which honestly doesn't inflict the expected reaction, sometime there are albums out there, that should not have intros and "Fear Itself" is one of them, it's followed by "Down Driven" built in groove riffing, shift into an aggressive thrash sound, the raspy vocals are stick to the genre, the bass carries an effective lines through the song granting a memorable rhythm section with the drums, "False Flag Attack" delivers a relentless display of technical thrash-groove very distinctive of Criminal, screaming vocals works very well for this kind of cut, "The Needle and Knife" begins with a very convincing rhythmic section very technical drum pattern and powerful bass lines, aggressive guitars shredding are incorporated masterfully to let the screaming vocals takes over to command the assault, "Summoning the Apocalypse" shift everything you heard before into a immeasurable speed to create a crushing and energetic thrash sound, ensuring the right aspects to frame a beautiful guitar solo in this track, "Deep in the Rot" contains a very infectious guitar riffing and a very skillful drum work make this track very compact and consistent with the rest of the album, "Wasted Youth" tries to infuse some melodic feel at start, but rapidly shift into a chaotic hardcore appeal, a very brief guitar solo shines and leaves you wanting for more, the scream and raspy vocals holds a crossover vibe, "Carne Molida" is the last track of "Fear Itself" structured with technical and intricate guitar work blend the speed and hostile grooves in a singular way, the lyrics are sung in Spanish, the drumming offer a more varied pace through the cut, very effective at the end.

The oscillation between tracks is very tight, which make sound "Fear Itself" something predictable and I do not mean that there is no value at all, with ten tracks; averaging 3:39 minutes, feels like they stick to the ordinary songwriting formula lacking of venturing and innovation, despite the powerful and compact sound accomplished, I still having troubles to digest this conventional blend of metal. 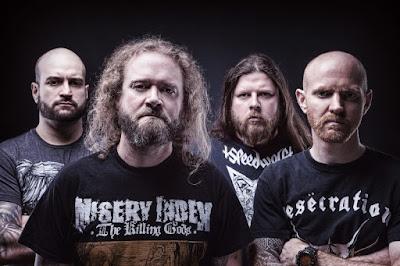