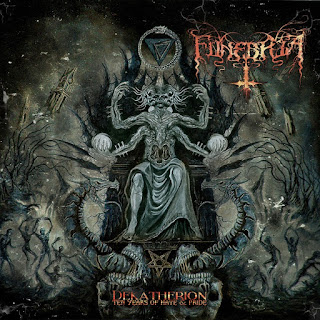 Directly from Maracaibo, Zulia in Venezuela emerge Funebria with a ruthless, heartbreaking and infernal album called “Dekatherion: Ten Years of Hate & Pride” under Satanath Records, this is their second full length which is preceded by their debut album titled “In Dominus Blasfemical Est... Ad Noctum Sathania” released back in 2009  as an independent effort, the band was formed around 2004, the current lineup is Seth aum Xul doing vocals, Iblis as bassist, Daemonae as guitarist and Ed Thorn behind the drums.

At the beginning they started playing old school black metal and it is reflected in their first demo entitled "Manifesto Slave" released in 2005 with a single track, but that was just the beginning, because Funebria begins a process of exploration, with new ideas and influences, as well as a lyrical concept more mature which is finally materialized in their EP "Holocaust Impio Golgotha in the Desert" in 2007 and their debut album “In Dominus Blasfemical Est... Ad Noctum Sathania” according to the band, their first album reached a distinctive and mature sound, starting with guitar riffs full of hate, devastating voices and drums guided by personal ideology, based on Nihilism and its complete absence, with a total rage against Christianity and I can tell you that’s a fact and on this occasion I refuse to talk more about this album, because they simply exceeded my expectations with "Dekatherion: Ten Years of Hate & Pride”.

The album kick off with a bombastic intro which make me think of the trumpets welcoming you to the gates of hell and quickly without losing the atmosphere sown by the introduction it’s linked to “Consolamentum” begins with marching drums and a rabid guitar riff, while Seth aum Xul blend his screams with their chaotic sound, this is the kind of track you expect when you first hear an album, delivering hell for your ears, “Serpent Sign” It is one of my favorite tracks on this album, their musical structure reflects its progression in terms of song writing is concerned, powerful, fast and brutal, Ed Thorn shows his class behind the drums handling fast paced with subtle changes to slower paced, coming near the end of the track Daemonae brings a unique guitar solo that makes memorable this track, I can tell you is a combination of elements bordering perfection, “Nihilist Revelation” with a more cohesive structure, deeper tones and voices to tear the depths of your soul, they know how to manage each change of pace, “Divide & Conquer” it is a track full of savagery, riff that appeal to be more thrasher with some good bass lines at the beginning by Iblis, the harsh vocals, assault and penetrate through the pores of your skin, while the drums sound overwhelming, “Azag (The Crown of Void)”  and “Cult of Cosmic Destruction” brings to this records some of the most conventional Black metal which both are well executed, but doesn’t show their full capacity, the last track in the album is the bonus track titled “Tormento” which seems to be a track re-recorded from their album debut, with Spanish lyrics but this time it sounds more aggressive, faster and full of anger.

In my opinion, I consider this album contains a strong concept and a solid musical structure, the production is good enough a slightly over produced on the drums section, but it doesn't affect drastically, Funebria it could be nominated as the best Black metal band from South America, they have set their own bar high enough for upcoming releases and we will be here waiting for them, horns up!! 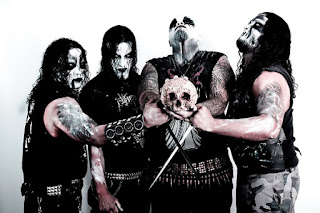