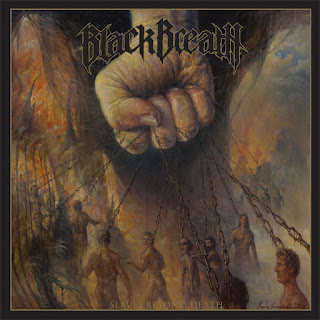 
There are genuine riff, torrents full of brutality and harsh vocals that sound evil

Black Breath they were formed in 2006 in Seattle, Washington US, for many of us they are a prominent band for their blend of genres going from Death metal and Thrash metal Crossover spicing up with some Crust, so far they have released a Demo in 2006, an EP "Razor to Oblivion" in 2008, their album debut "Heavy Breathing" in 2010, their second and most acclaimed released "Sentenced to Life" in 2012, the band's current lineup is Neil McAdams (vocals), Jamie Byrum (drums), Elijah Nelson (bass), Eric Wallace and Mark Palm (guitars), it took them three years to release their third album titled "Slaves Beyond Death", this is an eight track album, slightly under the fifty minutes length, like its predecessor, this album was recorded by Producer Kurt Ballou (High on Fire, Nails, Baptists, Converge) at God City studio in Salem, Massachusetts. It was mastered by Brad Boatright with the Artwork by Paolo Girardi.

I honestly believe that Black Breath have surprised us with their new album entering itself a little more into the melodic death metal, with harmonies, some d-beat drumming and more solo parts, moving away from those flashes of good Hardcore, Crust Punk, and those vibrant moments in their second album "Sentenced to Life", but exposing an evil and sicker side than ever before. So! if you were expecting for another dose of their previous recording, I'm afraid you might feel disappointed, but is not bad as you could think, the grooves still present, the relentless aggression remains untouchable, there are more elaborated riff with genuine intensity while the drums delivers torrents of full brutality and the harsh sounding vocals brings back the feeling of their old recordings.

The first track is "Pleasure, Pain, Disease" starting with smooth guitar riff to build up an atmosphere, to scourge you suddenly, with raspy vocals by Neil and the drums are battered by Byrum, "Slaves Beyond Death" is the second track structured in a doomy death riffs and double bass drums heading into a more aggressive and fast pace, a guitar solo that reach the highest point, then comes "Reaping Flesh" I will consider this track as the most representative of the new Black Breath sound, while the groovy riff remain there, the musical structure is more compelling, signs of maturity in the songwriting process, "Seed of Cain" exceptional instrumental intro that drives you through a Swedish tone, with melody and guitar solos, make this cut memorable, I have no question about how good is this album, I could keep on going track by track, but honestly with such level of composition, is hard to do it, I can tell you most of the tracks may fall into the same structure from a simple tone that tends to builds up, but the texture and pace are the keys for each one, “Arc of Violence”, “A Place of Insane Cruelty” fits perfectly to my description, while “Burning Hate” offers some of the most vile riff, sick vocals and pummeling drums with some Old School Death metal vibe, the closing track is "Chains of the Afterlife" an instrumental track reaching almost the eight minutes mark, decadent guitars that evolve with some kind of nuance that create an epic eerie ambience.


Obviously, this album will bring many divided opinions, the old fans are likely to strongly criticized Black Breath, however; we as human beings must understand that change or evolution will always be part of us, so, while you try to understand this, I will enjoy this great album, which certainly has no fillers. 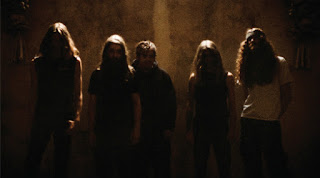