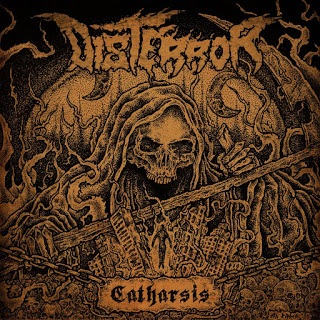 
Sometimes it worth the time to dig here and there, looking for something new or at least something interesting, so; this is how I found this band Disterror, few months ago I realize that Cancun, Mexico doesn't have only some of the most beautiful Caribbean beaches but their cuisine, their culture and the Mayan heritage make this place a paradise for tourist from around the world, but the fact is, as elsewhere, the metal scene has grown slowly but steadily, there are many bands down there, unfortunately, I can only remember another band at this moment they are Rottenness with Disterror, I believe they represent the Caribbean metal wave.

Disterror was formed in mid 2011 by Romeo in bass and vocals, Salxy in guitars and Nelson behind the drums and vocals, a few months of being formed they released their first demo titled "Upcoming Warfare" which has a style more defined towards Crust Hardcore Punk, around 2012 the band suffered some line-up changes leading Salxy and Nelson to leave the band, So; Romeo has to take care of the guitar and vocals and bring over Edgar in bass and Gallo in the drums and vocals, after these changes the band released an EP titled "Live, Create, Destroy" in 2013 which redirect the band's original sound incorporating more Thrasher riff to their sound, in 2014 the band recorded a split with MDD and by mid 2015 Disterror surprises the world with the release of their first full length entitled "Catharsis" by Akracia Records, their current style falls into a mix of Crust Black Thrash metal, you probably won't be surprised by such definition, since is nothing new, but I can tell you, they are not rewriting the handbook how to add Crust to your Metal, they instead follow so close the old school, adding some twist in their own style, that might be the reason why they sound so freaking great!

The album opens with "Viva la Muerte" as the bells calls full of grief, Disterror unleashes what seems to be an unmerciful assault with no remorse, right after this cut it follows "Condemned to Survive" in my opinion the best track of the album it's fast, emotive, raging riff, the growling vocals are so aggressive and the bass sounds so raw and clear you can listening without any problem and by the end perfectly blended a Blackened metal passage, this one will make you headbang irremediably, "Gilgamesh" it becomes the longest track slightly over the eight minutes mark, It begins with subtle and dramatic conversation in Spanish that leads into a melodic, fast, brutal a hellish adventure, "Labyrinth" heavy rooted into the Swedish death metal fully harmonized, discover the versatility they are able to reach, "Catharsis" the self titled track, is a killer with its mixture of unrelenting Black Thrash riff and infectious Crust, ending with some Post-metal riff while the bells call out.

Disterror has revived those epic moments appealing to their influences Amebix, Deviated Instinct and Axegrinder to deliver a shiny pearl polished in their own style, "Catharsis" will ensure you a lethal dose of rabid Crust infused with an old school Black metal, there will not mistake or guilty feeling when you hit play and listen to them. 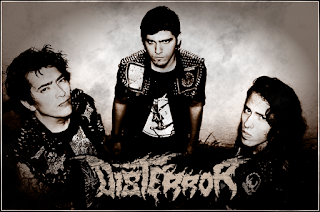