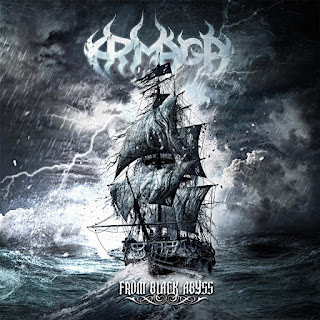 
Armaga the Symphonic Gothic Doom metal band hailing from Moscow, Russia; they have been around since beginings of 2008, originally formed by guitarist Andrey Vasiunin and bassist Evgeniy Schetinov they recruited drummer Evgeniy Krishtal and vocalist Oleg Sobolevskiy, with this line-up they released the first two recordings; their debut album "In the Ruins" in 2009 and the second one titled "Dark Authority" in 2010, before their third effort was released came over some significative line-up, changes, taking over the drums Dmitriy Kovalyov and vocalist Sergey Morozov, so "Mystic" was released in 2012 and few months ago, their fourth full length titled "From Black Abyss" all of them under Molot Records, Armaga plays a unique style of Symphonic Dark metal as they describe themselves, the album contains eleven tracks of superb quality.

There is no doubt about this guys how they has matured through the years, "From Black Abyss" has become the most outstanding release to date, here you can appreciate a near perfect orchestration, riff that shatter the ice, a majestic bass and bombastic blast that linger in your memory for a while, everything here is well structured, every pace, every melody, every ambience created surpass the expectations.

The first track "Monarchy of Darkness" opens with a suitable orchestration that prevails along the cut, the riff are heavy while the harsh vocals blends perfectly, close the 2:30 mark is a cello interlude that fade away as the riff goes back, the following track "Silhouette" was their first single, this is one of the best not only for the riff but keep up with the intensity, the bass lines infused their own personality and Sergey Morozov delivers growls with such power, next is the self titled track "From Black Abyss" which it was built, with heavy grooves is energetic and fast, "Stronghold" reminds me the intensity of Dimmu Borgir at "Death Cult Armageddon" era, the Symphonic elements are precise and devastating as a preamble to the apocalypse, "Dust" was the second single that they promoted, every song has their own key on this track I might suggest the clarinet become essential for the instrumentation, "Athame" is the fastest piece of the album, demolishing drums and a piano melody, blast your speakers and the shrieking vocals battling over the growl vocals, while the ruthless riff tear apart any trace of compassion, the last track is "Moments" this is an instrumental track, with excellent piano section and violin to add an overwhelming, decadent and dark ambiance.

Despite their catchy melodies, the powerful riff and excellent orchestration, I am afraid to say that "From Black Abyss", is good by itself, but doesn't offer nothing that we haven't heard before, but if you are into Symphonic metal, you might want to check this out, it really worth the time to listen them, the production is clear enough to experience every instrument and that is something that really make this album stand out from the bunch of other albums. 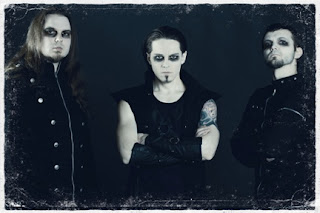