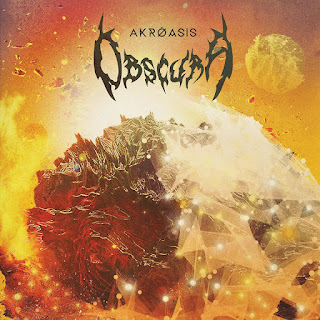 Obscura the German progressive technical death metal band has come with their newest production titled "Akróasis" it took almost five years to put out a record to Obscura's mastermind guitarist and vocalist Steffen Kummerer, but it wasn't easy after a full reformation of the band, until he meets with fretless bassist Linus Klausenitzer, drummer Sebastian Lanser and guitarist Tom Geldschläger, who left the band after recording the album allowing the lead guitarist Rafael Trujillo took over duties, with this facts in mind, it’s hard to answer the question if they were able to top off their previous album "Omnivium" released in 2011, as soon as you listen to their new record, you will figure it out.

"Akróasis" retains all the rhetorical and distinctive elements which make their sound unmatched, versatility remains a key part, very well structures arpeggios supported by a classic jazzy fretless bass, while the drums keeps up its endeavor tracing paths of intricate precision and the balance of the album fumbles between the chaotic and melodious moments of "Cosmogenesis" and the rabid progressive speed of "Omnivium", without a doubt it's complex and unpredictable.

The album opens with "Sermon Of The Seven Suns" it release all the intensity towards the infinite power in a rampant ecstasy, the jazzy elements sprout out through the varied soundscape, the vocals fall in a Schuldiner-esque, while the drums got beaten with determination and precision, "The Monist" reveals some nuanced of the early Florida tech death (Atheist, Nocturnus), the vocals take care of the brutal side in the cut, "Akróasis" the album self-titled track set a state of mind unique with a broad and compulsive sound spectrum, mesmerizing how are they able to retain you with subtle disharmonies, "Ten Sepiroth" bursts with a delicate acoustic guitar which works perfectly before unleash a hell of fast riffing, freezing blast beats shake the ground and open the way to the magnificent "Ode to the Sun" a beautiful mid pace track full of malevolence, heavy and dense riffage, the orchestral percussion are impressive and almost at the end of the cut, a choral arrangements are integrated exceptionally, "Fractal Dimension" skillful guitar work followed by a ceaseless drum builds passages and walls of cosmic sounds converging in a masterful guitar solo that vanishes in eternity, "Perpetual Infinity" remain overwhelming with very creative riff delighting the listener, the bass works towards the song complementing but forgetting the jazzy interludes for a moment, "Weltseele" this track is a subtle display of talent that scales through various hues and mergers of elements, creating a superb songwriting where can appreciate genuine riff death metal, mixed with acoustic guitars, violins, cellos, and double bass as well as clean vocals in narrative form and of course snarling vocals, the drum section play an important role giving the support to lay the pace and moods to this utterly masterpiece within their entire repertoire, the last track is the instrumental "The Origin of Primal Expression" which works pretty good as an end, giving the sense of tranquility and peace.

It is true they took a long time to perform their fourth album "Akróasis", but it is also true that you will not be disappointed, however if you are expecting somehow they follow the steps of "Omnivium" I fear you might question this album because lies more on elements we hear in "Cosmogenesis" but still I cannot clearly defined as a progeny of it, due to the expansive work in their songwriting and arrangements as ever before, it is highly recommended for enthusiasts who likes to venture in the intricate of the subgenre progressive and technical. 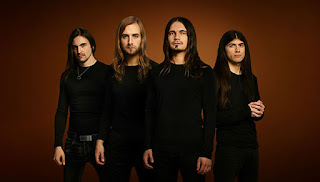