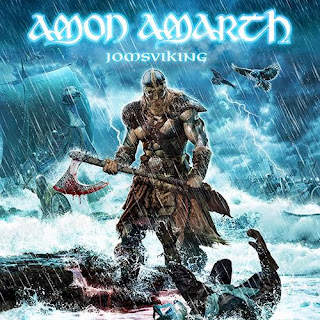 
Amon Amarth began their journey twenty four years ago, however I did found them four years later, when visiting my local store they were playing their first EP "Sorrow Throughout the Nine Worlds" and I was shocked, never before I was heard something like that, since that moment I was fascinated for these vikings, record after record, they haven't let me down at all, always with their unique formula has been able to craft and deliver a state of ecstasies with their melodic and brutal sound, but "Jomsviking" is not only that! For very first time in their career Amon Amarth bring to us, a very strong and unforgettable conceptual album, here Amon Amarth tells us a love story about a young man who finds his beloved woman married to another, arousing his anger and commit murder, he is being forced to flee in the midwinter, but swore to return to win her back and take revenge and that is just the beginning of a beautiful story where every track has its own personality and complement each other, taking you through disgrace, adventures, tragedies to conclude with a sad end, lyrically this the opus master of Amon Amarth.

Certainly something was bugging us, it was the curiosity to know who will replace their long time drummer Fredrik Andersson and finally got unveiled within three days before the official release of "Jomsviking" there is not better choice than Jocke Wallgren better known for his work at (Valkyrja, October Tide) at least he is the right man, to cover their upcoming US tour which kick off next April seventh in San Diego, California.


"Jomsviking" open with "First Kill" this track set everything in this opus master with sharp riff, Johan Hegg add his powerful and raw growls, the blasting and accurate drums by Tobias Gustafsson (Vomitory) are impressive, yes! you read right he was the drummer session, who helped Amon Amarth to record this album, "Wanderer" brings the grooving guitars of Olavi Mikkonen and Johan Söderberg with exceptional rhythms and solos, "On a Sea of Blood" is a full attack, relentless and furious the track have enough power to light up the moshpit, "One Against All" is a clear statement of hate and men resolution, undoubtedly the galloping riff owns this cut, while "Rise Your Horns" gives a breathe with its mid pace riffing and infectious vocals, only to let "The Way of Vikings" arrives with an epic feeling the story here tells us the tragedy of two men, who are best friends determined to fight, "At Dawn's First Light" Hegg dialog opens threatening and delves in easily recognizable riffage alike Maiden's style, even the bass line very alike to Harris, "One Thousand Burning Arrows" structured with heavy and dense riffage over a rhythmic section of bass and drums that collide and contrast with beautiful guitars elevated with cutthroat vocals, infuse enough energy to take the last breath before heading to the end, "Vengeance Is My Name" is faster than the previous track which is more oriented to their roots, "A Dream That Cannot Be" subtly welcomes the beginning of the epilogue featuring Doro Pesch, as guest the guitar work is intense and allows the dueling vocals of Hegg and Pesch to elaborate an unthinkable end for the two lovers of the story, "Back on Northern Shores" the last chapter with a mid pace riff and a melody in the background, Hegg snarls to tell the epic finale  with the proper dose of aggression and imagination, drenched in sadness and a fateful but grandiose end.

Amon Amarth's tenth studio album is the living proof that a steady line-up with a common core are capable to reach anywhere, without divagate in nowhere but always evolving their sound to the next level, "Jomsviking" can be defined as brutal and melodic with a beautiful concept, the band was able to create a fantastic story that inspire the listener to devour the album from the beginning to the end, this album becomes to be probably one of the best metal albums of the year and an iconic conceptual album for the years to come. 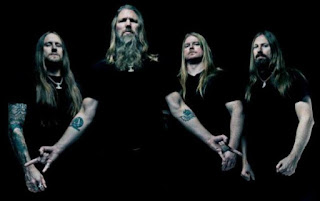