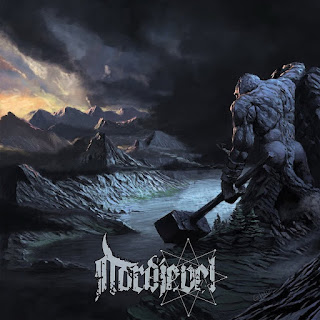 
Nordjevel is a brand new black metal band hailing from Ostfold, Norway formed by  vocalist Doedsadmiral (Svartelder) and guitarist Nord (Tvangeste) in the spring of 2015 after they found out they had so much in common, they started playing together and later on, they extended an invitation to drummer Fredrik Widigs (Marduk) to complement the lineup with bassist DezeptiCunt (Quadrivium), what you can expect here is literally is a dose from the second wave of black metal, with infectious tremolo picked, a hellish drum blast beat, a frantic and ravenous bass that melds their sound alluring to create a more melodic essence, the vocals are utterly impressive growls and shrieks are ceaseless through the album.

For me it is inevitable to compare with albums like "Opus Nocturne" from Marduk released in 1994 or debut album "Pentagram" by Gorgoroth released in the same year, both containing the intensity and rawness that represent that era, Nordjevel self titled debut album brings back to me those memories and feelings when I used to hear this kind of relentless and aggressive black metal from over twenty years ago, I might not be the only one thinking about it, because this sound lead the band, to ink a deal with Osmose Productions to released their first work.

The album opens with "The Shadows of Morbid Hunger" it carries a howling wind to set your mind for the chaos heading to you, fast tremolo picked, topped off with powerful double bass drum and blast beat that entangles you in a black abyss devilish shrieks vocals announces the hell is close the mid section slows down to let the bass rumble for a second, but before you can react they charges back again with indiscriminate hostility, next is "Sing for Devastation" it swirls with a mid pace tremolo incorporating melodies in their structure but the infectious growls remind us where we are, "Djevelen I Nord" keeps the path as the previous song delving with more melodic riff, while the drums draw a diverse pattern without losing the fury and intensity, "The Funeral Smell" with prominent fast ripping tremolo rhythm and chaotic blasting drums takes you for a frantic ride to hell, "Denne Tidløse Krigsdom" the sirens announce, that we have reached a point of no return and you can smell the ashes coming from the infernal regions, "Blood Horns" It doesn't any different approach keeps up with relentless tremolo picked at full speed while the shrieks vocals remain worshiping and the drum section does not reroute its devastation, "Det Ror Og Ror" the aesthetics of this track falls into the melody easily recognizable amidst the turmoil in their structure, "Når Noen Andre Dør..." is just the preamble to the album end with ravenous intensity never stop in their purpose inflicting poisonous riff and make you tremble in fear, "Norges Sorte Himmel" is the closing track, martial drums interact with a mid pace galloping rhythm riff and the lead guitar extends with a singular melody, evoking to be a guitar solo along the track, the end a little disappointing for the piano that does not seem to fit very well in this type of albums, the CD limited edition digipak contains, a bonus track "Raining Blood", Nordjevel decided to cover the mighty Slayer with a short and invariable sound of the original one, I'm afraid to say it, but; somehow breaks the balance and conception of this album.

Anyway this is a great album for a newly formed band, which is not so original but at least they play with such conviction, taking good care to the minimal details in songwriting and arrangements, using ferocious tremolo picked, disturbing blast beat and vocals to makes shiver your soul, there are few flaws in the end, that prevent this album be an excellent recording but other than that, it will be a band to remember at the end of the year. 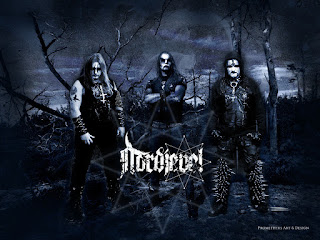