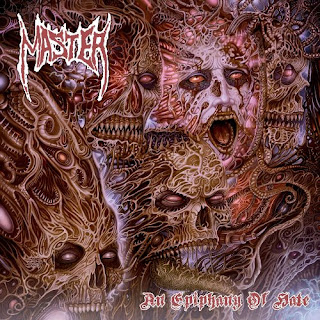 Sounds frantic and fearsome as ever before

Master the legendary band leaded by Paul Speckmann has been around for over thirty-three years, his legacy is ours! solidly embodied in thirteen albums, always being a reference to the underground scene, and refusing to be a sellout, with their signature punk style riffing, always carrying with the throaty vocals and ripping solos has defined their sound, over a month ago they released their thirteen full length entitled "An Epiphany of Hate" is simply a follow up in the undying line of prominent albums, always very well accepted by us, their tireless and insatiable followers.

Master legacy started in 1983 after Paul Speckmann and Bill Schmidt leave the local band War Cry based in Chicago, Illinois; After failing in the search for a guitarist, they decide to abandon the project and Speckmann form Death Strike in 1984 recruiting guitarist Chris Mittlebrun (who had auditioned for Master, the previous year), they invited drummer John Leprich, Death Strike recorded a demo entitled "Fuckin' Death" which sends them to the cusp in the underground scene, later on Leprich was replaced by Bill Schmidt, conforming the line-up with Speckmann on bass and vocals, Mittlebrun on guitar and Schmidt on drums, then they renamed the band as Master, by 1985 they were ready to release their debut album under Combat Records but that never happen due to contractual issues and the recordings were buried in time, It was not until 1990 through Nuclear Blast Records, they fail to deliver one of the most brutal and devastating death metal works of that time, their self-titled debut album "Master", a year later, they release their sophomore title "On the Seventh Day God Created... Master" and so! A legend was born, it worth to mention that Master relocated to Czech Republic and the current line-up is as follow: Paul Speckmann on bass and vocals, Alex Nejezchleba in lead and rhythm guitars and Zdenek Pradlovsky behind the Drums.

Taking a look on Master’s discography shows an impressive display of their commitment and dedication, to mention few outstanding titles, I can point of course their aforementioned debut album and sophomore releases as well as the "Unreleased 1985 Album" which finally saw the street light in 2003, "Slaves to Society" in 2007, and the trilogy formed by "The New Elite" in 2012, "The Witchhunt" released in 2013 and their newest album "An Epiphany of Hate" which sounds frantic and fearsome as ever before, "Subdue the Politician" opens with fast violent riff, while the drums are beaten with inherent fury, Speckmann ripping vocals announce the beginning of the journey through forty-four minutes of relentless death metal, the vibe they are capable to transmit is unique, they belong to that early breed of death metal bands who were able to establish the roots, for the bands that will came later, "Face Your Fear" extend the dose of that traditional death metal, with few simple riff they were able to craft a pummeling track, "Just Take My Right Arm" made of thrashing riff with an eloquent bass in the background, unleashes one of the most epic moments with a singular guitar solo, the ceaseless drums doesn't lose the timing and fearful vocals are spit without remorse, the self titled track "An Epiphany of Hate" rumbles through your speakers with a solid bass tunes and galloping guitars to harmonize with subtle melodies at high speed, "It's Clearly Eden" breaks in a furious stampede and sickening vocals, the songwriting allows each instrument sounds very powerful, "Red Alert" is the last track and strike towards your senses with demolishing thrashing riff, the melody inflicted succeeds with a pleasantly guitar solo.

Speckmann and friends stick to their roots and still shooting straight hooks and riff one after another; "An Epiphany of Hate" doesn't show anywhere any sign of mercy, while these guys keep pumping the blood through their hearts, there is still a chance to appreciate a very well respected and true underground death metal band from yesteryear. 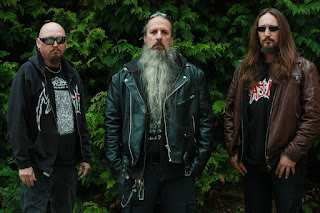 1. Subdue the Politician
2. Fiction Soon Becomes Reality
3. Face Your Fear
4. Just Be Yourself
5. Just Take My Right
6. An Epiphany of Hate
7. It's Clearly Eden
8. The People of the Damned
9. Senses All Will Be Controlled
10. Red Alert