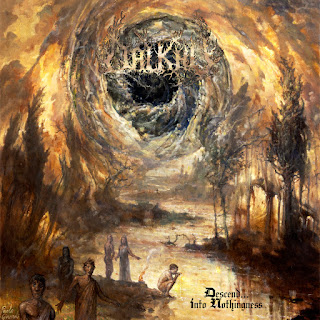 Dalkhu was formed in 2003 by J.G. on guitars, he was joined by  Kalki on drums and after few lineup changes the band was complete by Jurij on bass and Berstuk on vocals, with this line up ther recorded their album debut "Imperator" which was released back in October 2010, after the album released, Berstuk leave the band around 2011 and he is replaced by P.Ž. in 2012 and this is how Dalkhu began working on their second release, but lineup changes will hit the band again when Kalki and Jurij depart from the band in 2014, leaving the band as a two members band, however doesn't stop J.G. and P.Ž. to put the finishing touches on the songs for the new album, in August 2014 they enter at Nightside Studio, with Spawn of the Void as session drummer to record seven infamous tracks, the mixing ran by J.G. while the mastering was done at Necromorbus Studio by Tore Stjerna, to finally get the album released last August 15, 2015 under Satanath Records.

I have to be honest and tell you two important facts, first; as soon as I started to listen, "Descend... Into Nothingness" it blows me away and second I missed Dalkhu's first album "Imperator" five years ago, but I do not regret for it, because today's I can clearly witness the evolution of the band through all this time, listening both albums one after another and "Descend... Into Nothingness" stands by itself, not for been a groundbreaker but being creative, intricate and interesting, because you just can't get enough of it, this is an album you can hit re-play once and over.

Songs like the first one "Pitch Black Cave" with a superb guitar riff that shift you from one side of the room to the other, it has everything you been asking for catchy, brutality, dense and guttural vocals that freeze your soul, "The Fireborn"  rumbles your speakers and keeps up the same pace, Spawn of the Void does a neat work behind the drum set, while "In the Woods" slows down for couple of minutes and then unleashes their fury to magnificently returned to the starting point and thus continue in a chaotic seesaw, you can pick any cut off this album and you will find out a terrific songwriting riff that excel up to guitar tremolo that captivate your senses, "Soulkeepers" falls into melodious gloomy passages more oriented to the Norwegian influence and the closing epic cut, "E.N.N.F." reaching almost the ten minutes but unfortunately doesn't make the impact I was expecting, musically speaking, is not monotone is structured with different rhythms, probably there are many ideas in a song, that could well have become two tracks, who knows? Perhaps eventually I'll end up accepting.

Dalkhu does an extraordinary job, there is no question about it, they delivered a crushing Blackened death metal album, if you liked their debut album, prepare yourself to experience a renewed, energetic and aggressive sound, So if you are a fan within the genre don't hesitate to order your physical copy or download, you will not regret it. 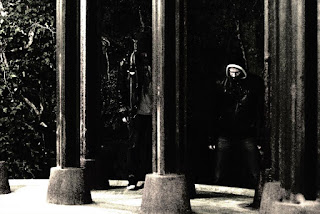