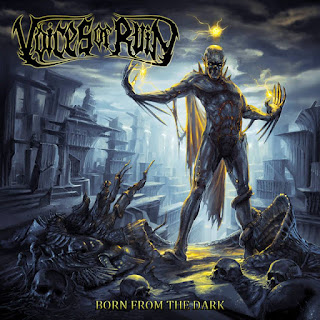 Voices of Ruin emerges again from the Southern California scene with a devastating follow up of their debut album released back in 2010, titled "Into Oblivion", five years passed to deliver their newest production titled "Born from the Dark" which was released few weeks ago, I'm still in shock after several listening to this album, many can point out that Melodic Death metal is no longer a mainstream and such bands who still dwelling within the sub genre, they lack of originality they might be right, but who cares? there is one thing those who dare to point out can't denied, those bands carry on the passion, the intensity and the fury, with crushing riff and lethal rhythm sections they are capable to recapture the essence of Gothenburg sound at the beginning of the nineties and Voices of Ruin are among those bands they invoke bands like Dark Tranquillity, In Flames, Amon Amarth as their influences.

Voices of Ruin have their headquarter in Costa Mesa, California; this five piece metal act was formed in 2008 by brothers Tom Barrett in guitars and Dave Barrett as vocalist, the band is complemented by Wally Myers as bassist, Steve Carlton in rhythm guitar and Lonnie Vanhorn behind percussion duties, "Born from the Dark" was recorded at Trench Studios and Ruin Sound & Recording, the album was produced by Voices of Ruin and Scott Fuller, (Abysmal Dawn, Annihilated) only to mention some of his previous works, it was engineered, mixed and mastered by Scott Fuller, framed by the exceptional cover art of talented Par Olofsson (Exodus, Immortal, Abysmal Dawn) are in his catalog.

Voices of Ruin, delve their sound into catchy guitar riff to drench with melodic waves and pummeling drums to infringe the brutality you has been craving for, "Born from the Dark" doesn't fail at all but neither reaches the pinnacle, with subtle changes of pace, they accomplish to take you in a memorial journey while you keep head banging with the stunning guitar work of Tom Barrett, "The Awakening" opens this album with distressing guitar riff, it suddenly becomes more intense with structured melodies and guttural vocals that shatter your senses, "The Black Horizon" made of intricate guitar riff and a heavy rhythm section it works perfectly to display the melodic vocal range of Dave Barrett, the ruthless percussion's by Lonnie Vanhorn keep up with the pace and the bassist Wally Myers weaves dense notes adding a sense of robust melody, "Death's Design" start with soft and melodious riff, that turn into a revival of the purest Melodic Death metal, resembling At the Gates or In Flames the dueling guitars stand out for the ferocious discharge of melodies and brutality blended so unsurpassed, "Fallen" is the following track and simply does that the emotion and intense head banging last longer than you would expect, at some point mentally you wouldn't believe from where it comes the embracing hell, but you let yourself go with the burning fire, it seems like Voices of Ruin leave the best tracks for the second half of the album, "Exiled... Into Darkness" the longest track doesn't let you down, rich guitar riff display their repertory and some tricks come out to keep you engage, the closing track "Blacked Out" kicks off with an intro of subtle drum and melodious bass to fuse with shredding guitars and vicious growling vocals, this is a track that never decline the intensity or balance of the whole record.

It is clear for me that Voices of Ruin have defined their sound through time blending somewhat their influences vastly rooted in the Gothenburg early sound with a twist of the traditional Thrash metal, what I really enjoy of this album is how they manage to pull a very well balance, clean and intricate production, this goes for all the record labels, here is plenty of talent to support, what are you waiting for? And you fans of the sub genre come join them! You won't be disappointed. 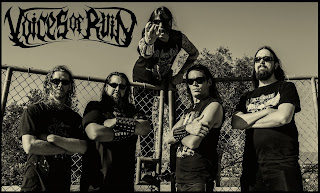