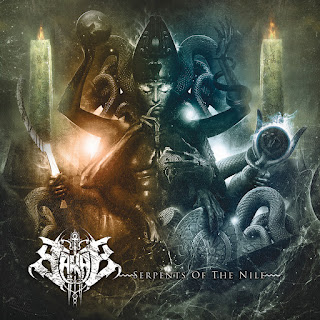 Scarab is a band formed in Cairo, Egypt and they play a pure Death metal influenced by their Ancient Egyptian Culture and Sprituality, they began their journey with the release of the EP titled “Valley of the Sandwalkers” in 2007, it contains three tracks, it passed only two years to record their album debut “Blinding the Masses” in 2009, which wrapped nine cuts of forsaken evil acts, both recording were released independently and work out good enough to take ViciSolum Productions attention and leading them to ink a deal to release their second full length “Serpents of the Nile” in the early Spring of 2015.

Death metal bands like Nile are not the only ones influenced by middle eastern culture, Nervecell and Maat outstand among the pack, but Scarab seems to be the fourth link to add into the chain of Egyptian themed Death metal, the band is integrated by Sammy Sayed in Vocals, Al Sharif Marzeban and Tarek Amr in Guitars, Mohamed El Sherbieny in Bass, Hatem El Akkad in Drums and Sherif Adel in Keyboards, for all those who instantly label this band as non genuine, let me tell you something, this guys has been around since 2001 under the name of Hate Suffocation, however in 2006 they decide to start from nothing and gave life to Scarab, stepping into a Death metal infused in their own roots, more melodic, mid paced rather than technical and brutal as the bands aforementioned.

The first track is “Calling Forth the Ancient Spirits of Kemet” an atmospheric submerged into classic Middle Eastern sounds, the keyboard provide a wall of sounds to set the ambient for the next song, the epic “Visions of a Blood River” which last over nine minutes, but is doesn’t disappoint you, the composition is layered over a mid paced and it’s loaded with a wide variety of guitar riff, while Hatem pummels his drums with total wrath, Sayed growls are dominant, “Serpents of the Nile” opens with savage riffs and constantly goes back and forth from fast paced to mid paced incorporating some folk notes to exalt the moment, “Funeral Pharaoh” takes you through a journey to ancient Egypt, where Pharaohs ruled the land, that intro is superb followed by sharp guitar riff that rips you apart, melody is mid paced and blunt drums, the cut is one of the best in this album, “Days of a Burial Mask” closes this album with a heavy and merciless riff driven into a chaotic mid paced, a powerful double bass drum and vocals growls define this tune as an exceptional from this Egyptians. 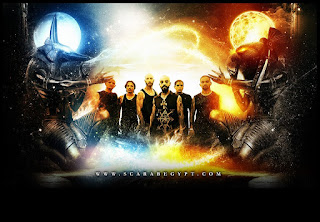 Undoubtedly Scarab has released a ponderous, powerful and unforgettable album plagued with folk passages, furious riff, relentless drums and guttural vocals that leave a mark on the Death metal grounds, as a witness of their legacy, this is an album that deserves time to be heard and wander in the desert dunes.

1. Calling Forth the Ancient Spirits of Kemet
2. Visions of a Blood River
3. Spells of Coming Forth by Day
4. Serpents of the Nile
5. Pyramid of Illusions
6. Funeral Pharaoh
7. The Afterlife Illusions
8. Days of a Burial Mask