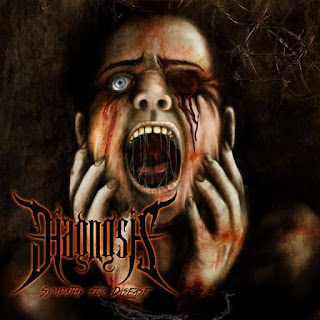 Diagnosis delivers such technical aggressively to infect your senses

Diagnosis is a five members band formed in Mexico City, around June 2014, maybe many of you haven't heard of them, but this band it is integrated by former members of (Archetype, Hyperion and Relief of the Souls) Isabel Romero she is the vocalist, Erubey Bello in guitars and both are the founders of the band, later on joined the band Ever Nicolas in rhythm guitars, Arturo Aguilar is the bassist and Chaak Rodriguez behind the drums, what they play appeals to be a Technical Death metal, with intricated guitars, stunning drums, the bass, doesn't only play along with the drums, it evolve with their own sound and of course powerful vocals by Isabel.

To be honest with you guys, I found this band while I was scrolling my interest through the artist roster in a very well known site to buy and download music in digital format, so suddenly I spot their sick album cover and it grabbed my attention, while reading more about them I realize that Isabel has quit Archetype to start Diagnosis along with Erubey Bello, but honestly what hook me up at the beginning is the powerful vocals, I have been listen to Isabel from her first two albums, recorded in her previous band and simply, she is amazing in what she does, however after the first impression and subsequent replays I put my attention into each instrument and I knew right away, that they are experienced musicians, "Sympathy For Disease," was recorded between the months of September 2014 and January 2015, it was released by db Metal Recording in July 2015.

The first track off this album is "Seclusion" which worked as their first single, here they play an  excellent guitar riff a decent drum section, the guitar solo exceeds my expectations and the growls by Isabel are bestial, themes as "Oblivion the Madness" delivers probably the best melody they were able to capture, the bass is really catchy, "Diagnosis" has a very intricate guitar work perhaps the most technical track to expose in the album, "Symphony for Disease" sounds intense and very aggressive the guitars are chaotic, bizarre but little bit repetitive, "Eyewitness" has one of the best rhythmic sections within the album, backing vocal sounds outstanding behind Isabel's grunts, the last track is "Stigmatized", is hard to describe a song like this which begin with not much personality however they managed to shift from one minute to another and make a unique track but unfortunately; after the two minutes mark it turns into a beast.

After listening couple of times to “Symphony for Disease” I can tell you this is not an easy album to digest due to their complex musical structure used and if you are not familiar with Atheist, Pestilence or Monstrosity then you might looking in the wrong place, the whole album last about 42 minutes, seems to be pretty much consistent, that at some point you wouldn’t be able to difference between one song or another, or we could just blame in production for not doing the split properly between the tracks. 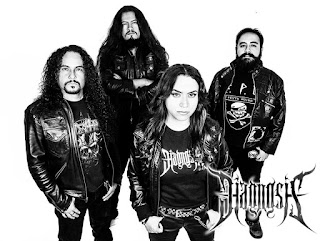