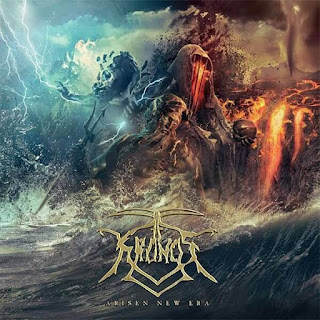 Tech death metal to blow your mind away

Kronos is a well known act from France they have been playing around since 1994 where they were simple teenagers, the band was formed in Thaon-les-Vosges, Lorraine; Kronos first line-up was Grams and Marot splitting duties in guitars and vocals, Jeremy playing the bass and backing vocals and Mike in the drums all of them were between 13 and 17 years old playing at that time some kind of Heavy Thrash metal, but times passed and they began to evolve their sound and with that… came up line-up changes, as usually happen for such of a young band, Marot departed from the band to be replace by  Nicolas Temmar in guitars and Christophe Gérardin joined the band doing vocals ending up with the released of their first demo “Outrance” in 1997, before they record and released a split with their own side project band named None Divine, Jeremy left the band and he is replaced by Tom in the bass and backing vocals, this line up last long enough to release their album debut “Titan’s Awakening” in 2001, under Warpath Records, but one more line-up change will happen before they enter the studios to recorded their sophomore album, Nicolas Temmar part ways with the band and Richard took over guitar duties, then “Colossal Titan Strife” is recorded and released by 2003 and their third album “The Hellenic Terror” released in 2007, both albums under the Spanish label Xtreem Music, it took them over eight years to record and released their fourth and newest album “Arisen New Era”  for Unique Leader Records, but not without before undergoing through more line-up changes, their all time drummer Mike and the vocalist Chistophe departed from the band, being replaced by Anthony in the drums and Triv as vocalist, so; Grams remains as the only original member of Kronos. 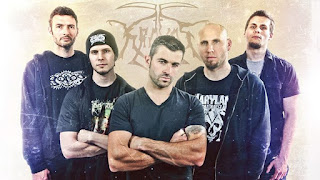 Being said a brief history of the band we can focus in their newest album “Arisen New Era” which brings a hell out of the Greek mythology loaded with technical and brutal riff that blends one after another, blistering drums and hellish vocals the first track “Infernal Abyss Sovereignty” fits perfectly with this description, adding a guitar solo to make it memorable, while the production stands out for neat and clear due to the current standards it doesn’t feel empty, meanwhile “Zeus Dethroned” is fast and aggressive which contrast pretty much with “Soul-Voracious Vultures” for the catchy riff incorporated from the beginning, merciless double bass drum to harmonize the guitar riff , “Rapture in Misery” kicks off with a tremendous riff, despite the huge amount of riff in the album, Kronos managed to succeed without sounding a big mess and getting lost into riff, “Klymenos Underwrath” has a really interesting mid section transitioning fast tempos to mid tempos and vice versa, actually I think it was smart to launched as the single to promote their album, “Aeons Titan Crown” is brutal but the melodic acoustic guitar ending takes to another level this cut, “Brotherlords” and “Purity Slaughtered” are a clear example of the endless creativity of this band, putting together a piece, sharp guitars, demolishing drum section and lethal grunts, the last track in this album is “Hellysium” it will blow your mind away with that mixture of technical riff and brutal drums, Kronos know how to keep you engaged until the last minute.

To resume, “Arisen New Era” evidence the endless creativity of this band, despite the long time out of the studio, they managed to bring an album that redefine somehow to compose, record and produce Technical Death metal, “Arisen New Era” means a lot more than you think, new members, new label, new decade, new fans and many more, so be prepare for Kronos and their saga of brutality.