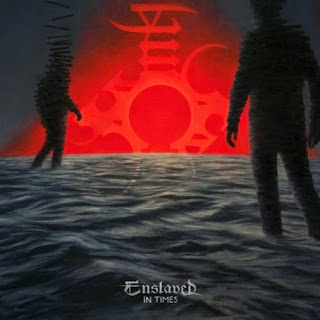 A Ferocious and beautiful piece of black metal

Enslaved is one of the few bands that has always caught my attention for their versatility, unique style in the song writing process, their progressive sound with no fear to experience new horizons, that is the reason to set them apart from all the bands emerging during the second wave of black metal, it had its origin at the beginnings of the nineties.

These Norwegians has demonstrated through their twenty four year of career an incredible progression from their Black metal roots leading us by an intricate and complex musical structure, offering us records as "Vikingligr Veldi", "Mardraum: Beyond the Within", "Below the Lights", "Isa", "Axioma Ethica Odini", "RIITIIR" to mention few of their huge catalog, now they approach to us with their latest album "In Times" it consist of six tracks surpassing the eight minute mark each and provide us some of the best tunes they have recorded so far.

The opening track "Thurisaz Dreaming" begins with a furious riff as hell is coming with it, while the harsh vocals by bassist/vocalist Grutle Kjellson are hellish then here we go with a subtle change of pace, and keyboardist/vocalist Larsen show off his clean vocals through the piece and you realize his evolution as singer if you think of him when they released "Isa" in 2004, "Building with Fire" probably the most catchy piece in the whole album and contrary to the previous track this one is more oriented to metal/rock comparable to Amorphis sound, unpretentious riff, aerie vocals gives an ethereal proportion there is a brilliant guitar solo and an exceptional bass interlude, all this elements will stick in your mind for a while, "One Thousand Years of Rain" it has a faint introduction that moves you into a reflection, to shake you off again Kjellson explode his throat to the skies and convey to a pure raw feeling alternating with harmonic and melodic chants battling each other, the wide variety of riff and progression chords are stunning at some time make you remember Opeth's style, "Nauthir Bleeding" comes to be one of the most progressive and diverse pieces in the album, perhaps the most unfathomable in their entire career, Bekkevold delivers a drumming section that sounds epic and flawless, rarely you will find a blending feeling of dynamism and balance alike as this, “In Times” keeps the same path as its predecessor but feels like they are building a wall with those progression chords before exploding into a chaotic commotion filled of blast, tremolo picking guitars and resonant growls, the conclusion of this albums comes by "Daylight" it has an unique atmosphere, dwells in a post-rock layers and it transcends to another plane,  the chants behind the harsh intonations are mesmerizing follows by one of the best if not the best guitar solo in this album, leaving the listener ecstatic kneeling before them and suddenly the final countercharge in form of a lethal guitar riff and hellish growls comes to end with you.

What we have here is that it's unlikely we can match it with any previous record released by Enslaved, what I mean is that it's a ferocious and beautiful piece of black metal, this album has the potential to be enjoyed by the listener little by little in a natural way, you just get carried away by your senses on a journey to the frenzy with subtle melodies, that will take your breath away, it is undeniable that Enslaved has been tracing a progressive path which seems endless while providing enough contrast and smooth transition for many years to come. 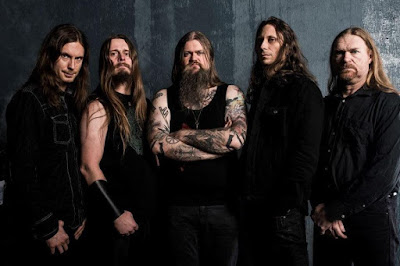