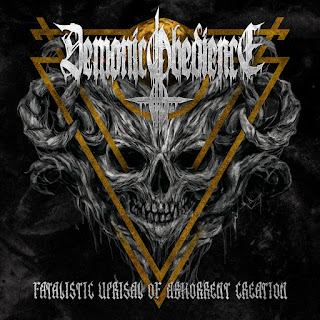 Demonic Obedience the Greek-Scottish band as many of you know for their two previous releases "Morbid Supremacy of Evil" in 2014 for Mexican label Azermedoth Records and "Nocturnal Hymns to the Fallen" in 2016 for Russian label Satanath Records, also the band has been known for being the solo project of George Ntavelas, former Deceptive Incarnation, from Greece, Demonic Obedience returns but this time as a trio recruiting bassist Mark Stormwhipper and vocalist Kruxator, to enter the studio and record what is their third album and it is titled "Fatalistic Uprisal of Abhorrent Creation" released by Satanath Records again and co-released by American label Sevared Records.

While "Fatalistic Uprisal of Abhorrent Creation" manages to retain the band essence heavy, crushing and devilish, it also attains to create more elaborated song structures and matures, in terms of production it sounds a little more clear than the previous releases avoiding the over distortion that made them sound generic, gaining their own personality that takes them away from a crowded Black metal scene and gives them the opportunity to reach a wider audience.


"Conjuration" is the starting point of this album with a full dense guitar riff, the guttural voice of Kruxator stands out, immediately comes to my mind bands like Vader, Morbid Angel and Immolation and that's a good sign for me, "Inception" is an aggressive torrent that bestially combines the fast and slow rhythms in this cut, "Awakening" shifts the pace drastically from the previous song furrowing with doomy and sinister passages to put in evidence the versatility acquired, "Outbreak" retakes the intensity from the beginning with sharp riffs and thoughtless attitude, this track is followed by "Decampment" which is a fast paced track with savages dynamic that will torture you and make you trembling with the hellish winds it carried itself with, Act 6 (66) delivers a bloody texture enriched with a vibrant emotion towards death, "Annihilation" unfolds with such destructive emotion and a perilous guitar to dare those who venture to not take them seriously, the last track delivered is "Scythes Bearer" consistent heavy and filthy lays in chaos through brutality leaving a path of devastation, that's how this album ends.

The overall of this album cannot be bad as its predecessor, the consistency in matter of songwriting excels in many ways from what we heard before with them and that is indisputable, the production is flawless and enhances the rawness and cruelty they want to transmit, however there are two facts I can't ignore, first is the length of the album, eight tracks and barely over thirty-three minutes, that amount of time of course let me down, but I can still survive, the second fact; but mainly reason why this album can't be as good as it sounds, is the lack of a drummer not even as guest or session drummer, at least the band doesn't give credits to anyone, anyway this is a sick album, for sick people, with sick taste. 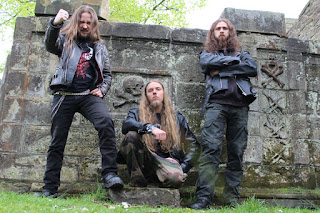