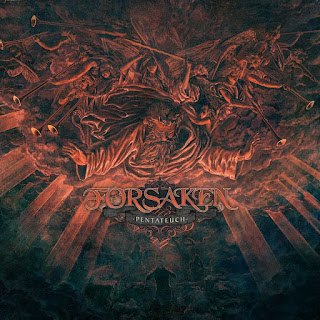 Another Gem to the crown of Doom metal


During the week been busy writing some other different topics than music, for or without any particular reason "Pentateuch" the fifth album of the Maltese Doom metal masters Forsaken was really played often, on my music player, the magic riffs infused in their melodic formula ended up captivating my attention and dragged me down to old memories and it was inevitable to compare to what I consider the trident of Epic Doom metal, the Swedish Candlemass, the American Solitude Aeturnus and the British act Solstice, because is exactly what you are about to find out here a classic and epic album in the purest vein of Doom metal.

In fact, I could tell you that they are contemporaries of the aforementioned bands and maybe because of their geographical location, the Nineties were not so easy for them, the lack of promotion, distribution and the proliferating Black metal scene were adverse factors for them, however the time, conviction and persistence have managed to mount another gem, to the crown of Epic Doom metal.


"Phaneros (Coming to Light)" an anthemic opener for "Serpent Bride", the riff that kicks off it takes some middle eastern influence, or at least I perceive that, eventually the track builds up with strength and personality the vocals by Leo Stivala reach the right pitch, creating an an special vibe, next is "The Banishment" honestly I'm not quite sure why they use this short track or prelude just right before "Primal Wound", whatever they tried to do didn't work for me, but I can tell you "Primal Wound" is powerful the riff is not over elaborate, allowing the bass take its moment with a bombastic drum execution, that makes this of the best tracks of the album, "The Dove and The Raven" opt to explore a more slower pace putting aside for a moment those epic passages, the backing vocals contrast a little to nothing with high pitch and energetic vocals of Stivala, "Decalogue" seems to be the obliged track that fills out any Doom metal work. I struggled managing listening to it, because the lack of engaging riffs and we are almost barely passed half way of this album, will be a good or bad omen? well "Sabaoth (The Law Giver)" shall end with the doubt, incorporating a closer approach to the NWOBHM more variables, catchy riff and a drum set that's invigorated and delivering an enjoyable guitar solo by Sean Vokovic, the last track is, "Apocryphal Winds" which barely go over the fifteen minutes mark, plenty of doomy passages with memorable melodies and choruses that melds just fine all together and brings a sad feeling, however after minute eleven all the sudden awakes and begin to shift everything around creating an emotional chaos.

After several listening to "Pentateuch" I can confirm what I stated at the beginning this is a another gem to the crown of Doom metal, regardless of the low moments offered and disconcerting ending, the album is more than that by itself it explores a wide variety within the genre, I cannot label them with an excellent work but certainly they achieve a good enough work after more than eight years out of the recording studio, lovers of Candlemass, Solitude Aeturnus and Solstice, Please! do yourself a favor and go grab this album, you won't regret it. 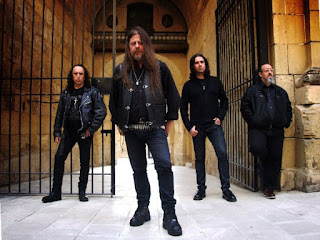