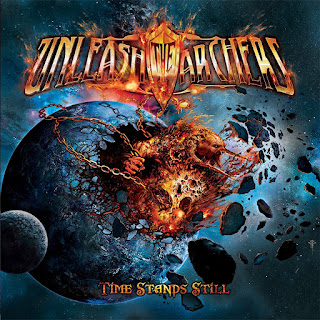 The Fury that characterize them with astonishing vocals

The Canadians Power/Melodic Death metal band Unleash The Archers has recently released their newly album titled "Time Stands Still" with their classical fury that characterize them, powerful chords, catchy rhythms and an astonishing vocals, this is their third effort and if you check them up before, (2009) "Behold the Devastation", (2011) "Demons of the AstroWaste" and their EP (2012) “Defy the Skies” you might surprise how this young band has been pushing out the boundaries, should be noted also, that “Time Stands Still” is their first album in which they have the support of a major label like Napalm Records.

Unleash The Archers leaded by the amazing vocalist Brittney Slayes and behind the drums Scott Buchannan they have managed to succeed after several line-up changes in the past years, now days the rest of the band it is complemented by the guitarists/backing vocals Grant Truesdell and Andrew Saunders, the rhythm section by bassist Kyle Sheppard, with this line-up they recorded "Time Stands Still" here you have ten majestically assembled tracks plus a bonus track.

The album start it with "Northern Passage" an instrumental cut that just work as a prologue for the next track which is "Frozen Steel" from the beginning, pumps up adrenaline pure with savage’s heavy riff, a really good indicative to satisfy your senses and don't forget to pay attention to Brittney’s voice which is amazing, next is "Hail of the Tide" here you can appreciate harsh vocals battling Brittney's clean vocals while the music runs with a frenzy pace open a path to a delightful guitar solo, then comes "Tonight We Ride" which is the track for the official video, displaying virtuous guitar elements to exhibit Brittney's vocal range Scott sounds energetic behind the drums and Kyle add a bass line to remember "Taste your Metal" revels in galloping guitars is extremely catchy no doubt it will be an anthem to sing along with Brittney next is "Crypt" is little bit more oriented to the melodic death metal side of the band with vicious riff, powerful blast beats a mid section filled with choruses, "No More Heroes" same as the previous cut delivers a hybrid of power/melodeth, of crushing guitars Unleash The Archers plays outstanding when battling harsh and clean vocals, because doesn't feel like the a classic scream behind Brittney's voice, "Dreamcrusher" is actually the longest track in this album and in their career too, at some point it was boring but there are two elements that holds up this theme, the amazing backing vocals that support Brittney's voice and Kyle once again adding a bass line interlude, "Going Down Fighting" I'm sure it has it's times, it's highs and lows but after nine minutes of the previous track it sounds lacking of something the only remarkable aspect I can remember is the guitar solo, "Time Stands Still" opens with some kind of Gregorian chants giving a way to Brittney's soaring vocals, infectious guitars by Grant and Andrew, while Kyle lays a blunt rhythmic section follow by Scott and his merciless drums, the bonus track is "Tonight We Ride" this is the video edit version.

My particular perception of the album "Time Stands Still" says this is a great album, they are not reinventing nothing, they just play good enough with their own elements and one of these elements is Brittney's voice, she sings with conviction and passion, I sincerely believe that their persistence has led them to where they are now; having a major label as Napalm Records to backing them up, will help Unleash The Archers to spread their name worldwide. 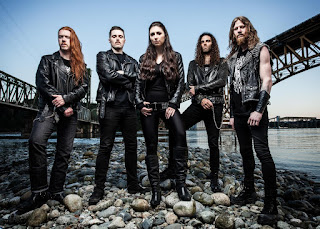