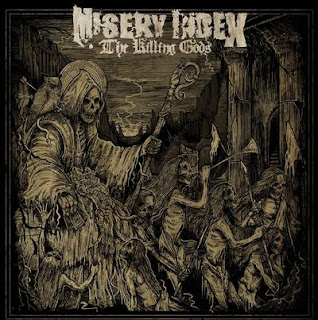 The Killing Gods an exceptional album


Misery Index have been around since 2001 formed by bassist/vocalist Jason Netherton ex-Dying Fetus, their sound is a Death metal mixed with some Grindcore, their lyrics fall into politics, class struggles, and dissidence after some line-up changes during the years in which their current line-up consists of Adam Jarvis behind the drum set, Mark Kloeppel in guitar/vocals and Darin Morris in guitar.

In 2014 Misery Index came out with one of the most outstanding recordings within the genre, "The Killing Gods" easily raped basically any album released that year, you can question my statement but the answer fall by itself just take a look into their discography several splits couple EP's and four previous full lengths show their persistence as their trade mark, after their album "Heirs to Thievery" released in 2010, they were taken more than four years to make "The Killing Gods" saw the light while the expectations grew around and how they could overcome them, but they did it, they kept their brutal death metal escence and grind ferocity linked to their hardcore roots adding a pinch of melody, that was enough to make a refreshing taste, something that stopped the thirst of the parched metalheads.

The first song an instrumental "Urfaust" works as preamble to the unmessurable and chaotic "The Calling" thrive in infectious riff and Jarvis blasting the hell out of the drums, the next one is another instrumental track "The Oath" which blend perfectly as an outro for the previous song, "Conjuring the Cull" and "The Harrowing" both with a variety of riffs laying in evidence their hardcore influences, the self-titled track opens with some Gregorian chants only to add a vibe "The Killing Gods" really engages with the heaviness and mid pace tempo sections well executed, fierce drumsticks pounding the drums is a key to excel this track "Cross to Bear" it could be one of the most technical tracks in this album for the huge amount of riff, while "Gallows Humor" comes to be the catchy song grooving section that will stick in your mind for a while and here comes some grind section as well in "Colony Collpase" it contains enough blasting to keep alive their fury, the closing track in the Digibox is a Ministry cover "Thieves of the New World Order" check it out really worth the time to listen for it.

Is worth to mention that Misery Index has shifted slightly from their beginings, where grind  sounds were more predominant, but not for that reason this turns into a fail, I certainly believe in progress and if they decide to incorporate more elements as melody and grooving riff to their sound, it prove that they have grown up musically and that is the reason I think they were able to released "The Killing Gods" an exceptional album.