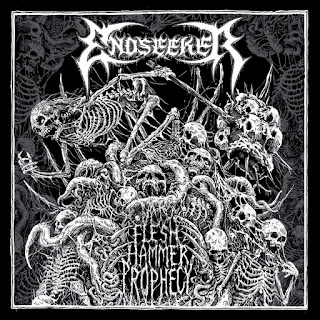 Endseeker is barely a new up and coming band from the underground, playing an unrelenting old school Death metal, formed in Hamburg, Germany during 2014 by former members of Buried in Black, Ben Liepelt (Guitars) and Torsten Eggert (Bass) both of them joined forces with the talented vocalist Lenny from (Devastator) recruiting former drummer and guitar player of Mephistopheles André Kummer and Jury Kowalczyk, respectively.

Soon they have ready five powerful tracks, they entered at Chemical Burn Studios in July 2015 to record their EP debut titled "Corrosive Revelation" released through F.D.A. Records, raising a good acceptation among the fans of the genre.

Few days ago, they just released their first full length titled "Flesh Hammer Prophecy" with ten tracks in the most pure vein of Death metal from yore, their sound appeals the attention of Bolt Thrower, Entombed and Morbid Angel fan bases, let's dig into the opening track, "Into the fire" works as an intro melding slower riffs, giving a free way to explode with the album's self-title track fast with very well pace, adding some interesting changes of rhythm, "Demon Spawn" just keep up with the intensity injected from the previous track, "Malicious Instinct" takes you right away to the "Left Hand Path" era, followed by "Worshipping the Bloodthirsty" kicking off with a subtle sludg-ish riff and delves with a groovy riff, "Feasting on the Decomposed" sounds very generic and for a brief moment gets me lost, "Shredding Your Graven Image" with a Swedish Gothemburg riff was able to hook me back into the recording, the bass sounds are pretty tight in the background, "Black Star Rising" makes a smooth transitional change of rhythm from the preceding track before breaks abruptly sickening, "Powder Burns" comes in a solid piece of well structured riff with merciless drums from the begining falling into a doomy passages, "Possessed by the Flame" ends the album almost at the same pace of the previous track, but somehow they manage to keep my attention, the subtle guitar solo along the song keeps coming at me over and over.

I definitely believe that Endseeker has a promising future, of course they need to polish some details here and there, but for now they have shown with their effort and dedication that they are worthy of taking seriously, So! from now on I will be on the lookout of your next production. 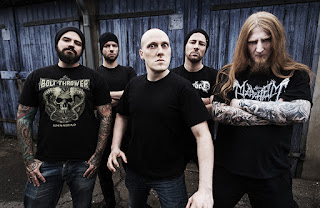