Hello! guys, how you been doing?

My name is Fernando Quiroz, I am Editor of Insanity Remains Webzine, first of all I want to thank you for accepting my interview, I'm excited and anxious to know as much as possible, as well as my readers will be very delighted to hear news about you; So, let's start it!

IRW: - Last time we heard a full-length album from Runemagick was near the end of summer in 2007, "Dawn of the End", was this album some kind of epilogue for the band's career? Did you plan to put an end to the band at that time?

Nicklas: - Now afterwards, the title may seem like that. But, as I remember, it was not planned. It just became so for various reasons. We stopped rehearsing as a band already in 2005. After that, it became more like a project when recording.
We got all other things that took up the time. Then there was certainly lack of inspiration and motivation.

IRW: - Did this period of inactivity for Runemagick give you the opportunity to achieve some other professional or personal projects?

Nicklas: - I already had other bands and projects (The Funeral Orchestra, Necrocurse and some more). Later there were also new bands like Heavydeath. Then I worked extremely much with my daily job for a few years as well. Me and Emma have had some children so it has taken the time so to speak. Emma has not done anything creative with music but was studying for a few years. Daniel has been involved in numerous bands and projects over the years like Heavydeath and Katatonia among others.

IRW: - Please could you describe briefly, how was Runemagick’s career before the hiatus in terms of success? Did feel that you accomplished what you had envisioned?

Nicklas: - As I answered earlier, it was more like a project the last two years. But before that, it was very creative and intense. I think we made several good albums like Enter The Realm Of Death, Darkness Death Doom, On Funeral Wings…

IRW: - Is there something you would have liked to do differently? Why?

Nicklas: - I might regret or miss is that we have not focused on playing more live than we did. It takes a while to get a routine to play live. We'll see how it goes this time.
I also regret recording old songs for the first album because I do not think they are good enough even I know other likes them. Also too fast tempos on the recording.

IRW: - Runemagick stayed away from the stages in the same way as the recording studio? Or were you active in the stage?

IRW: - During 2015, Runemagick released a demo in digital format entitled "Curse of the Dark Rune" with three themes; Did Emma and Daniel take part in this demo or was only Nicklas involved? Was this the official return for Runemagick?

Nicklas: - That’s and old demo, very old. Emma and Daniel not involved. It was just released on Bandcamp since many asks for old demo stuff. There are more old demos (previously unreleased) to be added.

Nicklas: - We started talking about maybe start up again a few years ago. We felt it was time again. First, there were plans to just test record a some songs and maybe record/release a single. We were also a bit influenced by fans, gig requests and so on. So it rolled quickly and many songs were written in 2017 and 2018. And now the album release.
Everything feels good. I hope we will feel the same when we meet for the first rehearsal in many years this coming weekend. Our first gigs will probably be a bit rusty but we will do our best.

IRW: - When was "Evoked from Abysmal Sleep" conceived? How did the songwriting process flow? Did you have any particular influence that is reflected in this album?

Nicklas: - Most of the material is written in 2017 and the beginning of 2018. There are probably a few old riffs as well. I had and have a lot of inspiration so it went well and fast so to speak. I'm writing either with the guitar or in my head. Can not say any specific influence more than I entered the Runemagick style.

IRW: - Who did the engineering, mixing and mastering of "Evoked from Abysmal Sleep" and where was it recorded? Apart from the band member's, did someone else participate during the recording of the album?

Nicklas: - The drums were recorded in a rehearsal place in Stockholm. We did not met and rehearse. Daniel just listened to my demos and recorded the drums in 3 hours (!). Then the rest was recorded at our home and in another rehearsal place. So you can say that everything recorded without budget, just our self-financed equipment. Jonas Blom did two guest guitar solos.
We let Johan Bäckman (also in Heavydeath) mix and master the album. We think he did a really good job!

IRW: - So far, how has the response been to "Evoked from Abysmal Sleep" from the press and followers? Are you happy with the response of your followers and media?

Nicklas: - Nowadays albums usually drown quite quickly. But the little I've read in reviews and social media is positive. As well as comments received in email and in real life. Which of course is fun. Who knows we could have been completely forgotten and nobody liked our new material at all.
This might give more flavor and inspiration to recording sessions in the future.

IRW: - If you had to choose among all of Runemagick’s albums prior to "Evoked from Abysmal Sleep", which one would better represent the band's personality?

IRW: - Would Darkness Death Doom be a contender in any way with "Evoked from Abysmal Sleep"? Why or why not?

Nicklas: - DDD is more advanced in terms of riffs and arrangements. But it’s a bit same kind of mid-pace riffing in dark sound-landscapes, according to me. I wanted the new album to be quite "simple" and straight forward. Then I think the new album might sound a bit like “Enter The Realm Of Death” too.

IRW: - Do you have tour plans? Who would you like to tour with? There are still few festivals left this year, do you have scheduled to play in some of them?

Nicklas: - We have decided to do a few gigs in 2018 and 2019 then we'll see what's happening. So far we are booked at Kill-Town (DK) festival in September, New York in November and one more festival next year. We will accept a few more if our calendars can be synced. 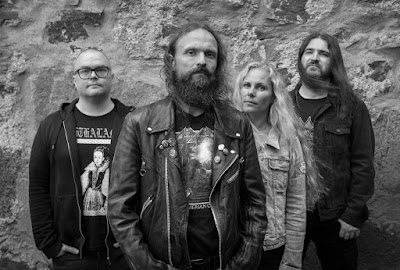 IRW: - What are your feelings about the current scene? Are you content with what you see and hear? or What do you dislike most?

Nicklas: - Of course I can be nostalgic and miss the scene from the late 80's and early 90's. But there are many advantages with the Internet and today's music scene as well. Hard to keep up with in all new bands and albums but I try to catch some.

IRW: - Do you see Runemagick fitting with the new bands and trends? Will you change something to fit in? Why or Why not?

Nicklas: - We have not changed how we sound, and will not change to fit in either. We have no goal to be or become popular. Of course nice if somebody likes what we do.
I find it difficult for me to judge if we are relevant or not. That’s up to the listeners.

IRW: - What are your thoughts about Metal and the Internet? Do you miss the old days when you sent letters to bands and fanzines and trading by mail?

Nicklas: - Yes as I said before I miss it sometimes. Feels like a part of that magic is gone. But it's probably because you were young and grew up with it then. If you are young today and start or enjoying bands, you probably like the scene as much now. It's not entirely different, just that it’s most digital today.

IRW: - Before finishing quickly can you tell us, can we expect something more from Runemagick within the next two years?

Nicklas: - We'll see. I have written a lot of music. But we in the band must feel for it. Also hope that our fans want to hear more of us, that will be fuel for inspiration and recordings.
I have other projects and bands to spend my time on too. However, it is not impossible that we record another album.

IRW: - Please, can you tell us where to order Runemagick’s latest album "Evoked from Abysmal Sleep" or any other missing albums in our collection? 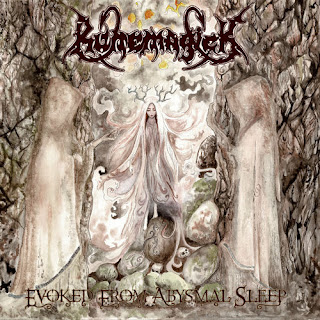 Nicklas: - We sell a few items on our Bandcamp page ( https://runemagick.bandcamp.com/ ) and merch page ( http://nirucon.storenvy.com/collections/1638399-runemagick ) . And via our labels/partners Aftermath Music, Flowing Downwards and Parasitic Records.

Nicklas: - We hope both old and new death/doom maniacs will like our new album! Your support means a lot to us!
Thanks for the interview!!
I want to thank you very much again Nicklas for your support, I hope you have enjoyed this session of questions and answers, I feel very honored to have you here at Insanity Remains Webzine, I can only wish you the best for the rest of the year and the next one, may it be very wild for you.